by Susannah Grant posted on 6 March 2018

Having spent a wonderful 10 days in India previously, INC members, Denise Kildare, Callie Stewart and  Nilima Parker decided to travel together again with friends and family to visit Mareni Pilcher in Vienna.

Soon we found ourselves walking through streets of Wien, it felt a bit like walking into the pages of a fairy tale, as a horse and carriage trots past one ornate palace after another.

“December in Vienna” conjures up Christmas markets. There are more than a dozen in Vienna and we made it our mission to visit as many as we could! The best-known Christmas market is on Rathausplatz, a winter wonderland complete with a giant illuminated Christmas tree, mulled wine, traditional food and arts and crafts stalls. The open air Naschmarkt on the banks of the river Wein is about a mile long, where vendors sell fresh fruit and vegetables, spices, pickles, olives, cheese and bread from around the world. Tastings are essential!

Perhaps our most memorable market visit was to the  Weihnachtsmarkt, which extends out in front of the majestic Schönbrunn Palace, a former imperial summer residence. We spent a happy afternoon with a mug of steaming hot, spiced wine in hand, wandering through the stalls in freezing temperatures, buying traditional handicrafts and hand-made Christmas decorations to take home.

Trying to stay warm as we toured and explored the city gave us the perfect excuse to sample Viennese local cuisine and coffee house culture.  Our morning treat, as soon as we started to get a little chilly on our walking tours, was to head to one of Vienna’s famous coffee houses – Cafe Sperl for classic apfelstrudel,  Cafe Central for topfenstrudel (sweet quark cheese wrapped in strudel pastry) and to Cafe Sacher for their secret recipe, chocolate laden sachertorte.

Our culinary exploration of Viennese cuisine continued in the evenings with some of Vienna’s famous local dishes: Wiener schnitzel (veal coated in breadcrumbs and fried), Tafelspitz (boiled beef with vegetables and spices in broth) and rich and hearty beef goulash with dumplings. Yes, we did eat a lot but our activities and the temperatures demanded it! 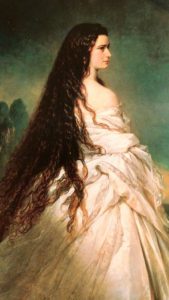 We also explored some museums on our own. One was the museum of Sisi, Elizabeth Empress of Austria, married to Emperor Franz Joseph of Austria. She was famous for her figure and beauty and her extraordinary hair that is said to have weighed 6 kilos! Having been brought up in the relaxed Bavarian court, Elizabeth found the strict protocol of the Austrian court very restricting and she became quite unhappy. She escaped by travelling extensively and learning many foreign languages. You could say she was the first true European Citizen, deeply interested in different peoples and cultures. She loved the Hungarian people and was instrumental in the founding of the Austrian Hungarian Empire. Born in 1837 she was assassinated in Italy by an Italian anarchist in 1898.

The Austrian capital is bursting with Imperial history and Baroque architecture, with a musical accompaniment by Mozart and Strauss. We heartily recommend the coffee-house culture and laidback vibe to warm the souls of anyone wishing to enjoy the adventure of Wien at Christmas.